Breaking Up: San Diego’s Life After the Chargers

One of the most painful ways to lose in sports is a city losing its team. San Diego Chargers fans were heartbroken when their team moved to Los Angeles. But not all of them. Maya Kroth reports from San Diego. Plus: King Kaufman on one of several teams that have left St. 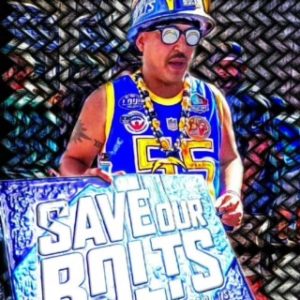 One of the most painful types of losing in sports is when a city loses its team. San Diego Chargers fans were heartbroken and angry when their team moved up the freeway to Los Angeles this year. They burned jerseys and threw eggs at the team headquarters.

But not all of them. “Not having the NFL be in your city is a win,” said writer and sports commentator Dallas McLaughlin. “There’s no way it’s not.” With the Chargers struggling to convince an indifferent L.A. to pay attention to them, Maya Kroth reports from San Diego now that the Bolts have bolted.

Plus: The St. Louis Browns check off two boxes for this show. Their city lost them when they left town and became the Baltimore Orioles after the 1953 season, and in their half-century in the Lou, they were consistent losers.

You’d have to be at least 70 or so to even remember the Browns existing. But there’s still a St. Louis Browns fan club, and the guy who runs it, Emmett McAuliffe, isn’t even 60. Host King Kaufman talks to him about the appeal of a team he never saw — at least not before the Orioles wore throwback Browns uniforms during a road series against the Cardinals in 2003.

Also, author Burton Boxerman talks about growing up as a Browns fan, and how, once they left, he had to find a new team to root for and he picked the Chicago Cubs, because their relentless losing reminded him of his beloved Brownies.

And Ed Mickelson, 91 years old and one of 14 living former Browns, talks about his brief but memorable time at Sportsman’s Park. He wasn’t a Brown for long, but he did drive in the last run in the team’s history. It was the only run they scored that day as they went down to their final defeat.

People in the episode

Maya Kroth is a freelance print and audio reporter based in Mexico City. She’s available now for reporting on the aftermath of the Mexico City earthquake. You can find her work at mayakroth.com. Editors seeking coverage should contact her via Facebook messenger.

Dallas McLaughlin is a writer and performer in San Diego. His debut standup album is called An Evening of This!

Matthew T. Hall (referred to as Matt Hall in the story) is the editorial and opinion director at the San Diego Union-Tribune.

John Abundez, pictured above, is a lifelong Chargers fan better known as Johnny Bolt Pride. He says he has never worn a jersey with an owner’s name on the back. He roots for his team, and remains a Chargers fan even though they’ve moved to Los Angeles.

C-Siccness is a San Diego hip-hop artist whose song “Save Our Bolts” was used in this episode with permission.

Emmett McAuliffe is an intellectual property lawyer in St. Louis and a member of the board of the St. Louis Browns Historical Society. His law office is filled with Browns memorabilia. Click his photo for a gallery.

Burton Boxerman is the author, with his wife, Benita Boxerman, of many books about baseball history and other subjects, including Jews and Baseball, Volume 1 and Volume 2; and Ebbets to Veeck to Busch: Eight Owners Who Shaped Baseball. They are working on a biography of Bill DeWitt Sr., who was a Browns executive and owner, and the father of the current Cardinals owner, Bill DeWitt Jr.

Ed Mickelson is one of 14 living former St. Louis Browns. He was a first baseman who spent the last few weeks of the 1953 season with the Browns, driving in the last run in team history during a 2-1, 11-inning loss to the Chicago White Sox on Sept. 27, 1953. Mickelson, 91, had a solid, 11-year career in the minor leagues and played briefly in the big leagues for the Cardinals and the Cubs in addition to his stint with the Browns.

After retiring from baseball, Mickelson was a football and baseball coach and a counselor in St. Louis-area high schools, retiring in 1993. His 2007 memoir, Out of the Park: Memoir of a Minor League Baseball All-Star, is notable for its honesty about his post-career depression. This photo from a Browns Reunion Luncheon on Sept. 26, 2017, shows Mickelson, left, talking to his friend and the most famous living ex-Brown, Don Larsen.