“Showboating Fighters Get KTFO” – that’s knocked the F out – is a popular, and delicious, YouTube genre. But even before the internet, Anthony “Hollywood” Hembrick practically invented the form. An undefeated light-heavyweight contender, Hembrick danced up a choreographed storm with his cornermen before getting KO’d in the first round of a fight on national TV.

Anthony “Hollywood” Hembrick was a light-heavyweight contender, an exciting boxer who was 14-0 with eight knockouts. On June 12, 1990, he headlined a card at Fort Bragg, North Carolina, where he’d served with the Army’s 82nd Airborne Division. With a wildly partisan Army crowd in attendance and a national TV audience on USA Network, Hembrick met journeyman Booker T. Word for the vacant U.S. Boxing Association title, a steppingstone belt on the way to a world championship.

An admirer of fellow Detroiter Sugar Ray Robinson, Hembrick “understood the showbiz angle of boxing,” his manager, Arnie “Tokyo” Rosenthal, says. Hembrick dressed his cornermen in bike shorts had them get “fade” haircuts — this was 1990 — and before the fight, performed a series of choreographed dance moves with them. The crowd loved it.

And then the fight started. Hembrick controlled the first round and buckled Word’s knees with a left hook. But then Word caught Hembrick with a wild right hand, knocking him down face first. Hembrick got up, but never really recovered. Two knockdowns later, the fight was over. A first-round KO.

“Showboating Fighters Get KTFO” is a popular genre on YouTube now. KTFO means knocked the f— out. But even 15 years before YouTube launched, Hembrick’s awful night was the dominant fact of his career.

This wasn’t the first or last disappointment for Hembrick, who had been the captain of the 1988 U.S. Olympic boxing team and would eventually fight for the world title twice. He retired in 1996 after he was diagnosed with a leaky blood vessel in his brain. His health today is good, he says with a chuckle, “besides some dementia.” He says that manifests itself in forgetfulness, but he doesn’t present as a person struggling with dementia. 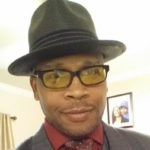 Anthony Hembrick fought professionally from 1989 to 1996, retiring with a record of 31-8-2. He was the USBA light heavyweight champion in 1995. He lost a controversial split decision to Leonzer Barber for the WBO light heavyweight title in 1992, and lost a unanimous decision to Henry Maske for the IBF title in 1993. As an amateur, Hembrick had been a star of the Army team out of Fort Bragg, North Carolina, and was elected captain of the 1988 U.S. Olympic boxing team. A schedule mixup caused him to miss his first fight in Seoul, resulting in disqualification. After his boxing career ended, Hembrick reenlisted in the Army, retiring with a full pension. He lives in Dallas, where he coaches boxing. He’s seen here in a recent photo.

Tokyo Rosenthal is an Americana singer-songwriter who, in one of many previous professional incarnations, was Hembrick’s manager. He’s also been a TV executive and commentator, a photographer and an author. His latest album is This Minstrel Life

and his new book is Our Last Seder

Alfonso “Smitty” Smith was the coach of the Army boxing team at Fort Bragg, and also worked in Hembrick’s corner during his professional career. Smitty says he didn’t have any say in the choosing of Hembrick’s opponents, but didn’t like the idea of Booker T. Word from the start, because Word was a “short, muscular guy that stayed in his chest,” exactly the kind of fighter who always gave Hembrick problems, “even in the gym.” Smith was inducted into the Carolina Boxing Hall of Fame in 2009.